What good are moths?

National Moth Week has arrived. Across the country museums and community groups are celebrating the splendor of one of the most diverse herbivore groups on earth. To join in the fun the team at the Essig Museum imaged our collection of hawk moths (family Sphingidae) for the Notes from Nature project – they are sprinkled in with the other CalBug images. Hawk moths (or sphinx moths) range from medium to very large in size, from very cryptic to conspicuously colored, and from day-flying humming bird and bumble bee mimics to night-flying ghosts of the dark forests. Hawk moth caterpillars are known as hornworms, because of the horn-like spike on their hind-end, and include major pests of tomatoes, tobacco, and other crops. See what species live in your state by searching the Butterflies and Moths of North America website.

Moths and butterflies comprise the order Lepidoptera. The name comes from Latin meaning “scale-wings,” referring to the layers of microscopic scales that make up the color patterns on the wings and body (that powder you got on your fingers if you ever touched a butterfly’s wings). These scales can take on many shapes, sizes, and colors depending on their role in camouflage, mating, or protecting eggs. Scale color patterns are very useful in identifying different species of Lepidoptera – most Americans can recognize a monarch butterfly by its black and red pattern. But they are also the focus of very intense research in evolutionary development, biomechanics, biochemistry, and other areas of ecology and evolution. In one of the Hawaiian moths that I study (Cydia) there are special pouches on the male wings that contain pheromone-producing glands and special “sex” scales that help disperse the mate-attracting odors.

As an entomologist I am often asked, “What good are mosquitoes?” Or, “What good are cockroaches?” Or especially because they are the focus of my research, “What good are moths?“ People are most familiar with pests of human enterprise, such as clothes moths (Tinea pellionella and Tineola bisselliella), meal moths (Plodia interpunctella), and various garden pests such as cutworms. But these are a tiny fraction of moth diversity. Also, keep in mind that all animals feed on something and live somewhere. The only thing that makes some of them pests is that they feed on things we rather they didn’t in places we don’t want them to. Imagine if we placed a high value on large piles of manure, then dung beetles would be considered pests as well. But there are also species we think of as beneficial. A great example in the northwestern United States is the cinnabar moth (Tyria jacobaeae) whose caterpillars were imported to feed on tansy ragwort, a pest plant from Eurasia toxic to cattle and other animals. Caterpillars in general keep plants from taking over the world. In turn they are kept in check by their predators, including bats, birds, and parasitic flies and wasps. 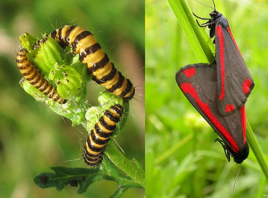 Speaking of bats … Did you know that some moths have a tympanum (like our ear drum) that is tuned to the echo location signal of bats? Upon hearing the signal of an approaching bat they begin evasive maneuvers. Some tiger moths even send a signal back to bats saying, “You don’t want to eat me, I don’t taste good.” Recent research suggests that hawk moths produce similar warnings to bats, possibly because they do not taste good (many hornworms feed on toxic plants) or possibly because they have spiky legs that are difficult to swallow.

So what good are moths? Apart from being biologically fascinating, aesthetically pleasing, and behaviorally wondrous, amazing aerial acrobats, important links in food webs and controllers of pest plants, good classroom pets, figures in myths and fables and symbols of change, and important models for ecological and evolutionary research, I guess not much.

One response to “What good are moths?”