Thank You! Meet Our (MGCL) Sack-bearer Moths, aka Poop-house Caterpillars!

Thank you for your work on the Mixed Bag of Specimens from the McGuire Center! It was amazing to see this expedition finish in a short amount of time. We have another grab bag of specimens for you to transcribe. But before transcribing read about some of the moths you will be transcribing, thanks to graduate student Ryan St. Laurent. 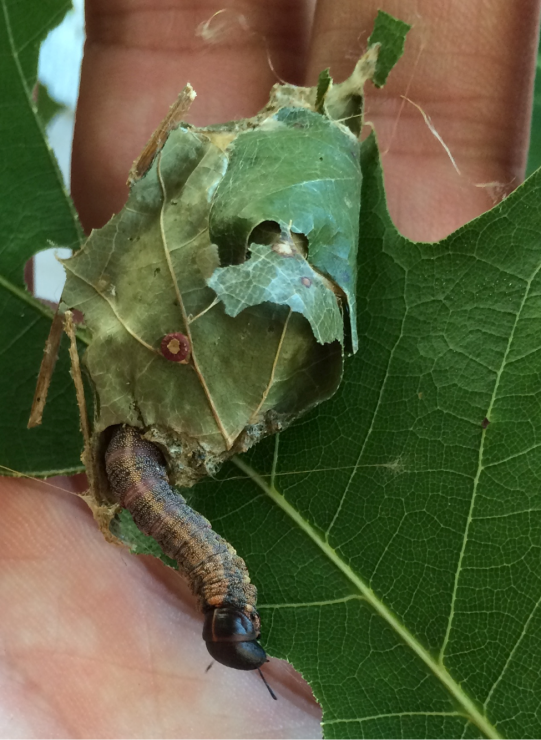 Throughout the Americas, but especially in the rainforests and savannahs of Latin America, live a peculiar family of moths called Mimallonidae. These moths are colloquially known as “Sack-bearers,” a name derived from their strange caterpillars which make open-ended shelters that are unlike any other constructed by butterflies and moths. These shelters are made of frass (poop), silk, and plant material; the caterpillars drag around their funny houses much like a hermit crab carries its shell. Sack-bearer caterpillars have evolved specialized bodies adapted to living inside these shelters, their heads and butts are tough and shield-like, so they can stuff either end of their bodies in either opening of their house, preventing unwanted intruders from entering. While these shelters usually appear mostly to be made of leaves and silk, the frass is interwoven into the shelter, providing structure and rigidity. The frass pellets are actually used much like little bricks. Maybe these moths are more accurately called Poop-house Caterpillars, rather than Sack-bearers? Relative to many other moth families, the Poop-house caterpillar family is not particularly diverse, with only about 300 species total. Despite the low number of species, and restricted distribution, Mimallonidae are an interesting piece of the overall evolutionary puzzle of Lepidoptera (butterflies and moths). From recent studies that examined the DNA of many families of Lepidoptera, it has become increasingly clear that Mimallonidae share a common ancestor with a globally distributed group of moths that also happens to be the most diverse in terms of number of species. Does this mean that the ancestor of most moths that are alive today was like a Poop-house caterpillar, and not like a typical caterpillar that you might find in your garden? Therefore, it seems that studying Mimallonidae will help researchers unravel the evolutionary history of butterflies and moths more broadly. This Notes from Nature expedition, which includes moths of this fascinating family, will be the first attempt to digitize and transcribe labels of an entire Mimallonidae collection, setting the stage for countless studies on Mimallonidae and Lepidoptera more broadly, by making images and data of hundreds of these specimens available to researchers around the world.