Why do we need so many collections of the same plant?! 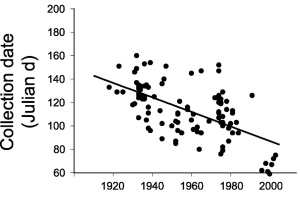 Figure from a paper by C. Lavoie and D. Lachance showing a shift toward earlier flowering time for coltsfoot (Tussilago farfara). Image used by permission of the Botanical Society of America.

When people first get a look inside of a herbarium cabinet they often ask: “why do you need so many specimens of the same plant species?” Well there are a few reasons for this. People who study plants don’t just want to see one example of a species. They may want to see multiple collections so that they can understand the variation in characters for the species. For example, the leaf shape may be highly variable so we would need to see different specimens to understand this. It may also be important to get an idea of all the places where a certain plant can be found. We would need several specimens from different locations to understand the geography. We may also want to know how characteristics of a plant, or its geographic distribution, might be changing over time. In this case, we would need collections from multiple years.

The change in when plants bloom (aka phenological shift) has received a lot of attention over the past few years. It is now well established that changes in the climate have caused many species to shift the timing of when the leaves emerge in the spring (leaf out) and when the flowers open. This shift has major implications. One example is that a plant might bloom before its pollinators are available. If pollination does not occur, this could result in the plant not being able to produce fruits and seeds, which are important for the future success of the species.

Herbarium specimens can be used in a relatively simple way to study phenological shifts. 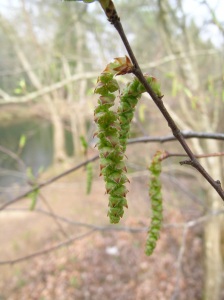 Using the date information provided on the specimen label, we can record the day of the year that different plant collections were made (e.g., collections showing flowers in bloom) and graph these values against the year. What is commonly found is that plants are blooming earlier as a response to a warmer climate. For example, the graphic at the right shows how a plant is blooming earlier. The collections made in the year 2000 bloomed several days earlier than the ones collected in 1920. The full article can be read here.

I am interested in knowing the date that plants were collected for a different reason.

For exotic species, or species that are relatively newly introduced into an area, it is valuable to know when they first arrived in a new place and how fast they are spreading. If we can locate the earliest museum records of a species in the United States for example, we can then trace its expansion to new areas over time using additional museum records (subsequent collections). We can then examine where the exotic species has spread and how fast. There are many factors that influence the spread of exotic species, but describing the basic aspects of their spread in space and time is a first important step in our efforts to understand this process.

The Notes From Nature projects asks citizen scientists to transcribe specimen labels in order to help record this kind of information that is important in ecological research. The date is a simple but extremely important piece of information. Phenological shifts and the spread of exotic species are two important issues that can be addressed using this information.